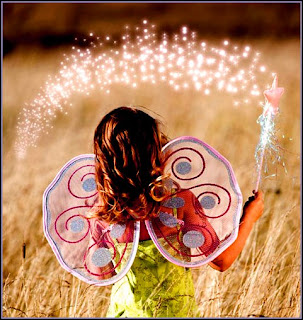 Photo from: PhotoshopEssentials.com
They offer free tutorials in Adobe Photoshop!
I recently came to realize that I have been on a quest for a magical life since I was , hmm, well very very young. I was desperate to read and when I did start reading I went hog wild and read everything I could get my hands on. Greek Mythology was my favorite and then Fantasy took over which later blossomed out into the hybrid Science Fiction/Fantasy and the sky was the limit from there. My quest gained a great deal of momentum when I met my spiritual teacher and received Shaktipat at the age of eleven. Suddenly my mind was awakened to all sorts of new ideas and possibilities as well as true love.

As the years passed my ideas about what magic, true magic, was had changed as I lost some of my innocence and 'grew up'. Thanks to God, my ideas didn't change as drastically as they change for most people I've know, but but they did change nonetheless. I no longer believed that anything was possible and I felt lost and alone more often over time. I did therapy which helped me to 'find my way back to myself', if you will. Then I moved to Santa Fe, New Mexico and that was certainly a turning point that steered me back towards the light. I detoured into some darkness but it truly is always darkest before the dawn. I eventually got to a place where I was not just asking for help from God/Consciousness (insert favorite name here, lol) but I was begging for it. And then I came across a man who had recently been to see Joao de Deus (John of God) in Abadiania, Brazil. I had wanted to make this trip for about five years but I'd never had a reason to go because I thought of him as a healer of the physical body and I am blessed with fantastic health.

The man conveyed to me how John of God had removed all of the anger from his soul. I knew it was true because he'd had a terrible reputation for being a supremely unpleasant man and the man I was speaking to was obviously kind-hearted and full of love and gratitude. I thought to myself that if John of God could remove the anger from this guy then I bet he could probably help me with the sadness and pain that I'd still felt a deep connection to at the time. So at that moment I said to the man and to myself that I was going to see John of God! I didn't know how but I knew I'd get there and that boosted my quest up several notches.

Soon after this I was told about The Secret for the first time and by the third time I was told about how great it was I figured maybe I should check it out. I'm grateful that I did 'cause it added some high octane fuel to my newly reawakened quest. I watched it every day for over a month. My creativity reared it's beautiful head and I started designing t-shirts, blogging and playing! Yup, I started wanting to play like a little girl again and I liked it! Skipping, jumping, singing and cartwheeling around in the grass has brought a whole lotta love and joy into my life and my dog's life too, lol. I can't even express how freeing that has been... a lot though! Already my connection to the sadness and pain had started to lessen somewhat.

About a year and a half after I watched The Secret I found some Abraham-Hicks cds that I had lost track of for quite a few years and started listening to them again. I'd actually been to an Abraham-Hicks seminar in Albuquerque in '02... I remember having loved it but somehow... Well, we all get things in our own time, sheesh! (Abraham-Hicks is where the 'Law of Attraction' the core message of The Secret actually comes from.) Their cd's are amazing, very empowering. They have some great videos on Youtube as well. You'll find one of the videos in a previous post of mine if you click on the tag Abraham-Hicks.

So then about nine months ago a friend of mine asked me to stay with her while she was in the hospital recovering from an operation that she needed to have. She came through her operation like a champion and the recovery was more of the same. Several weeks after I returned home she called me and told me that she decided she wanted to go to Brazil to see John of God and she wanted to bring me with her as a thank you. She said that it would be fun to go with me, being as I'd wanted to go for such a long time and would be very enthusiastic. I was ecstatic, of course, and a couple of months later I found myself in Abadiania, Brazil having the time of my life! It was heaven on earth for me. I've written plenty about that though so I will move on...

I will tell you that the sadness and pain I felt such a strong connection to is gone, completely gone, and I have received many other fabulous gifts from that trip as well. I am most certainly going back, hopefully soon. One of the gifts I received was another huge boost towards the knowing that a magical life is not only possible but it's happening now. My experiences in Abadiania were truly fantastical and definitely magical. Spiritual teachers have been telling me that anything is possible since I was a child and now a variety of scientists are offering corroborating evidence with quantum physics. Just check out What the Bleep!? - Down the Rabbit Hole, it's amazing.

My most recent incredible boost came from a friend of mine in Abadiania. He told me about Matrix Energetics. I don't know really how to describe Matrix Energetics so I'll just give you an excerpt from the website and if you like it you can click on the paragraph and follow the link down this rabbit hole;

Matrix Energetics is a complete system of healing, self-care and transformation. It is a transferable and teachable phenomenon, powered by intent, which has a physical and observable effect every time. Complete beginners as well as seasoned health care practitioners are able to perform and utilize this work to affect change-with no waiting and no running of energy. Anyone can learn this skill and practice Matrix Energetics.

I can tell you that after taking one seminar I am totally hooked on it! I had so much fun at that seminar it was like taking a vacation with a bunch of crazy fun kids and just playing and playing and playing! Which is pretty much what we did with some quantum physics, a little consciousness an

d all kinds of what I'd call magic thrown into the games. On a video testimonial from the website a woman said something to the effect that a Matrix Energetics seminar was like a trip to Hogwart's. ( the school that Harry Potter attends) I'd have to agree with her. And now I know for certain that magic does exist! True magic, the kind of magic that you always wanted to believe in. I could tell you incredible stories but I think that if you are ready for this amazing experience you will know it and you will embrace it! I did. I found out about Matrix Energetics in mid May and I was at a seminar in L.A. on June 6th. The money I needed to do it just flowed right to me and I took that crazy bull's horns and went with it.

For the past couple of years I have found myself living in joy more and more of the time. My temper has dramatically changed and I find it so much easier to let go of anger, pain and shame. I am able to feel my emotions and then to let them go, so simple! When I do find myself in a tantrum I am able to step back and laugh at myself and move on to the business of my magical life! The things that I am wanting are flowing into my life more and more easily. Ease and joy are the name of my game now and it's happening... like magic! So the next time someone tells you that you can do anything, be anything or have anything that you are wishing for... Believe it! It's the complete and utter truth.
Posted by Jen at 3:57 PM No comments: