Bag Free And Lovin' It!

I have several canvas shopping bags which give a nice burst of satisfaction to my shopping experience, however, I was getting guilty twinges every time I used a plastic bag to protect my greens. Now, I'm sure that others have come up with this solution before me but for those of you who have not, I am re-using my produce bags. I turn them inside out and let them dry and then I keep them in my canvas bags for my next shopping trip. Result!
http://www.boonecountyky.org/BCSWM/plasticbag.aspx
Posted by Jen at 1:19 PM No comments: 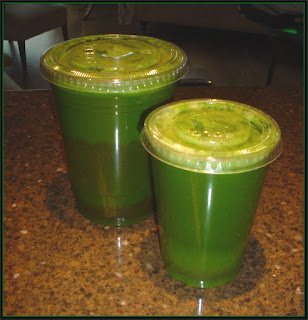 One of my best friends recently found out that she had a tumor at the back of her tongue and it was cancerous. Her reaction was to immediately change her diet, she went from being a total foodie to being basically vegan, literally overnight. Raw foods and raw juices instantly became a part of her daily routine. When she called me to ask if I would stay with her after her surgery to help her out while she recuperated I told her I was more than happy to do it. I ended up arriving before the surgery and staying with her through most of her two week hospital visit as well as for her recoup time. Her surgery and recovery could not have gone better, I am happy to report, we are a week out of the hospital and she's almost back to her old self!

Now I must give a little back story here. Fifteen years ago I did seva (selfless service) in what was then called a 'living foods' kitchen. I NEVER ate the food because it looked scary and it just was not my thing at... hmmmm, twenty four years of age. Several years later my brother and his wife owned a health food store where they sold raw green vegetable juice and swore by it. I simply was not interested. Patooey! Not for me! I don't like nasty things! Eventually I finally made the switch to buying organic and locally grown products but was still completely turned off by the whole raw foods/living foods lifestyle change idea. Too much work and I like to enjoy my food, for the love of Pete!

Okay, in walks my old friend. So we are in her apartment and I am complaining about bags under my eyes and she tells me that perhaps if I stopped drinking my one Coke a day and switched from coffee to tea I might lessen my baggage, so to speak. I really couldn't argue with her, so I just did it. It was so much easier than I thought, really. The next day we were at a store waiting for her raw green vegetable juice (with a single green apple added to take the edge off) and she encouraged me to try one and see how it felt. I took a sip of hers and, bleghch! I tried a second sip and it was not as bad but I still opted for a nice fruit drink with acai and apple. However the next day I did order the green drink, a small one, and while it didn't cause my taste buds to sing with joy, it didn't make me gag either. Later on that day I looked in the mirror and, lo and behold, the bags under my eyes were almost completely gone!

What was truly amazing was that the next day I actually looked forward to my green juice. I had a craving to feel the healthy burst that I'd gotten after drinking it. It felt so good to know that I love myself enough to have such a craving. I thought about it and I realized that enjoying food does not necessarily mean being a slave to your taste buds. The first taste of the drink turned me off, the second taste intrigued me and bucking it up and just drinking the darn thing created a new understanding of yumminess. The other fantastic effect that it has had on me is that I no longer enjoy really unhealthy drinks and foods. I used to love a particular brand of turkey bacon that I'm sure is packed with chemicals. It simply does not taste good to me any longer. I went to a restaurant with a friend recently and ordered a lemonade. It was obviously made from a mix and full of sugar, I just could not drink it. Now I wholeheartedly enjoy my green juice, flavor and all, down to the last drop! I am retraining my unruly taste buds, it can be done!

The book that my healthy friend gave me, and I feel that I can really work with, is 'Raw Food Detox Diet'. It allows one to enter the world of raw food on there own terms which I find refreshing. I think part of the reason that I could never go there before was because it always seemed like an all or nothing lifestyle change. Giving myself permission to start small has opened the door to those changes and they are no longer so terribly daunting. In fact they are quite exciting! So, drink up gang, drink to a healthy and well oxygenated future you! You will not be disappointed.
Posted by Jen at 4:04 PM 2 comments: